You can read  more about vitamin D physiology here, and the role it plays in your immune system here.

What is vitamin D?

Vitamin D is a hormone with multiple physiologic actions, the metabolites of which are stored in tissues and circulating plasma (Vassallo & Camargo, 2010).  1,25-dihydroxyvitamin D3 (1,25-OH), the active form of vitamin D, is a key modulator of the immune system (Assa et al., 2014).  Decreased levels have been linked to autoimmune diseases and more recently, the prevalence of IBD. This is seem more often in those who have vitamin D receptor polymorphisms (Assa et al., 2014).  In fact, colonic epithelial VDR expression is reduced in IBD patients. As a result, it makes sense to evaluate the role vitamin D plays in gut health.

A brief word about IBD

IBD is used to describe conditions that involve inflammation of the bowel, including Crohn’s disease and ulcerative colitis. They are thought to involve a complex interplay of genetics, environmental, microbial and immune triggers (Kong et al., 2008). Impaired mucosal barrier function and leaky gut are common in IBD patients.

Dysregulation of junction proteins is an important mechanism that underlies the increased intestinal permeability that is seen in the intestinal epithelium of IBS patients. A compromised intestinal barrier can results in exposure of the host to luminal antigens and bacteria which can lead to inflammation (Kong et al., 2008).  Interestingly, the integrity of the intestinal mucosal barrier has the ability regenerate, through mechanisms of intestinal stem cells located at the base of the crypt, which can replenish the surface epithelium (Kong et al., 2008).

Key point: The tight junctions of the intestinal epithelium can seal the paracellular space and are responsible for regulating the “leakiness” or permeability of the mucosal barrier.  You may have heard the term leaky gut.

Recent studies indicate a link between vitamin D deficiency, IBD risk, and gut health. According to Kong et al, seasonal variations in the onset and severity of IBD have been reported, with a higher incidence during the lower vitamin D exposing winter months. Sun exposure is an important source of vitamin D, and the prevalence of IBD exhibits a north-south gradient, paralleling sunlight exposure (Kong et al., 2008). 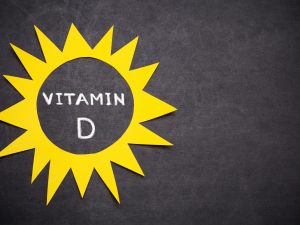 So how does vitamin D work?

I found it interesting that vitamin D has such a powerful role in regulating the tight junction proteins in the intestinal epithelium, playing a significant role in gut health. Vitamin D has an immunomodulating role in the intestinal mucosa by having the ability to suppress T cell –mediated immune responses (Kong et al., 2008). In studies with mice that were induced bowel inflammation using dextran sulfate sodium (DSS), scientists were able to observe the response of the intestinal epithelium to the vitamin D receptor (VDR) in maintaining barrier homeostasis.

This is solid evidence that vitamin D plays a role in gut health.

So how is vitamin D deficiency contribute to damage to the GI tract and poor gut health (Assa et al., 2014)?

Vitamin D and allergies in children

Another area that piqued my interest was the role vitamin D deficiency may have in children’s allergies.  I have noticed more and more children are dealing with different types of food allergies, making it an epidemic.  Vitamin D synthesis requires exposure to UVB radiation in sunlight, and lack of sunlight can be a major contributor to vitamin D deficiency (Vassallo & Camargo, 2010).

Kids are often home during the winter months and in general, do not play outdoors as often as they used to. Because of differences in UVB exposure, levels of vitamin D fluctuate with season (being lowest in the winter).

As it was mentioned earlier, gastrointestinal infections can induce a leaky epithelium and thus dietary and microbial antigens are easily permitted into the intestinal lumen. This may be what promotes the maladaptive allergic response to food antigens which is often seen in subjects with food allergies.