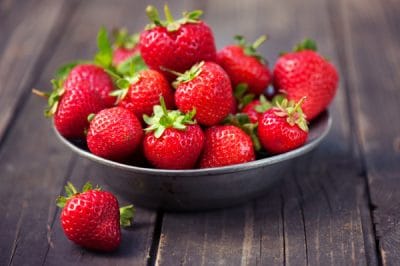 I love strawberries!  They are high in Vitamin C and just delicious on salads.  Sadly, they also can cause pain in many people who have mast cell activation disorder. Read below….

I have recently become very interested in histamine intolerance and mast cells, and strawberries is on the list of foods high in histamine. There is some significant research being done on mast cell activation, autoimmune disease and the immune system.  Histamine intolerance is the disequilibrium between accumulated histamine and histamine degradation (Manzotti, Breda, Di Gioacchino, & Burastero, 2016).  Histamine degradation is dependent on the primary enzyme, diamine oxidase (DAO). Histamine is a biogenic amine found in foods such as pickles, matured cheese, fermented foods and leftovers.  Some foods are histamine liberators and that includes fruits such as pineapples, bananas, citrus fruits, papayas and strawberries.  The ingestion of histamine rich foods can provoke a variety of symptoms such as digestive, arrhythmia, flushing, asthma, hypotension, rhinoconjunctivitis, and headaches.  Impaired DAO production is often the culprit, which can result in increased enteral histamine uptake and increased plasma histamine concentrations (Manzotti et al., 2016).  Interesting the study by Manzotti demonstrated that 71% of patients reported functional bloating after consuming high histamine foods.

The latest research indicates that mast cells that release histamine and other inflammation in the bloodstream are active participants in autoimmune disease related tissue damage.  Increased mast cell activity, release of histamine and other inflammatory agents are frequently seen in autoimmune conditions such as MS, RA and many others (Healing Histamine, n.d.).  A variety of receptors including those engaged by antibody, complement, pathogens, and intrinsic danger signals are implicated in mast cell activation in disease (Brown & Hatfield, 2012).  Mast cells can also recruit other immune cells such as neutrophils, to the sites of autoimmune destruction.  “Mast cells can only act as accessory cells to the self-reactive T and/or antibody driven autoimmune responses” (Brown & Hatfield, 2012).  This includes mast cells among one of the major contributors to autoimmunity and should definitely be considered.

Autoimmune and allergic diseases share fundamentally important features in that both are the result of “hypersensitive” immune responses directed toward inherently harmless antigens (Brown & Hatfield, 2012).  An early progress of autoimmune disease involves the activation and expansion of T and/or antibody producing B cells that wear autoreactive receptors.  These autoreactive T or B cells can then enter the bloodstream and migrate to sites of inflamed tissues expressing relevant autoantigens (Brown & Hatfield, 2012). “T cells, through the elaboration of cytotoxic mediators, and antibodies, through complement fixation or their ability to activate resident accessory cells such as macrophages and mast cells via Fc receptor engagement, can play direct roles in tissue destruction at these sites” (Brown & Hatfield, 2012)

In addition to eliciting the above described adaptive immune response, antigens can engage a class of danger- associated receptors on both adaptive and innate immune cells, including mast cells.  These receptors include toll-like receptors (TLRs) and Nacht-LRRs (NLRs) (Brown & Hatfield, 2012).  Activation of immune cells through TLRs and NLRs induces the expression of multiple inflammatory mediators that can ultimately result in local tissue damage causing the release of normally sequestered tissue antigen (Brown & Hatfield, 2012). Subsequent recognition of these antigens by T or B cells will induce activation and initiate autoimmunity. Alternatively, infection-induced activation of accessory immune cells, including mast cells, macrophages, and neutrophils, can boost inflammation and transform a relatively modest autoreactive response.

There is evidence that other TLRs are expressed on mast cells.   For example, activation of mature mast cells through TLR2 results in their production of several pro-inflammatory cytokines critical in autoimmunity including IL-17, IFNγ, TNF, and IL-1β.  Mast cells also express multiple IgG Fc receptors. This is significant because IgG autoantibodies are hallmarks of many autoimmune diseases and have been detected in multiple autoimmune diseases.