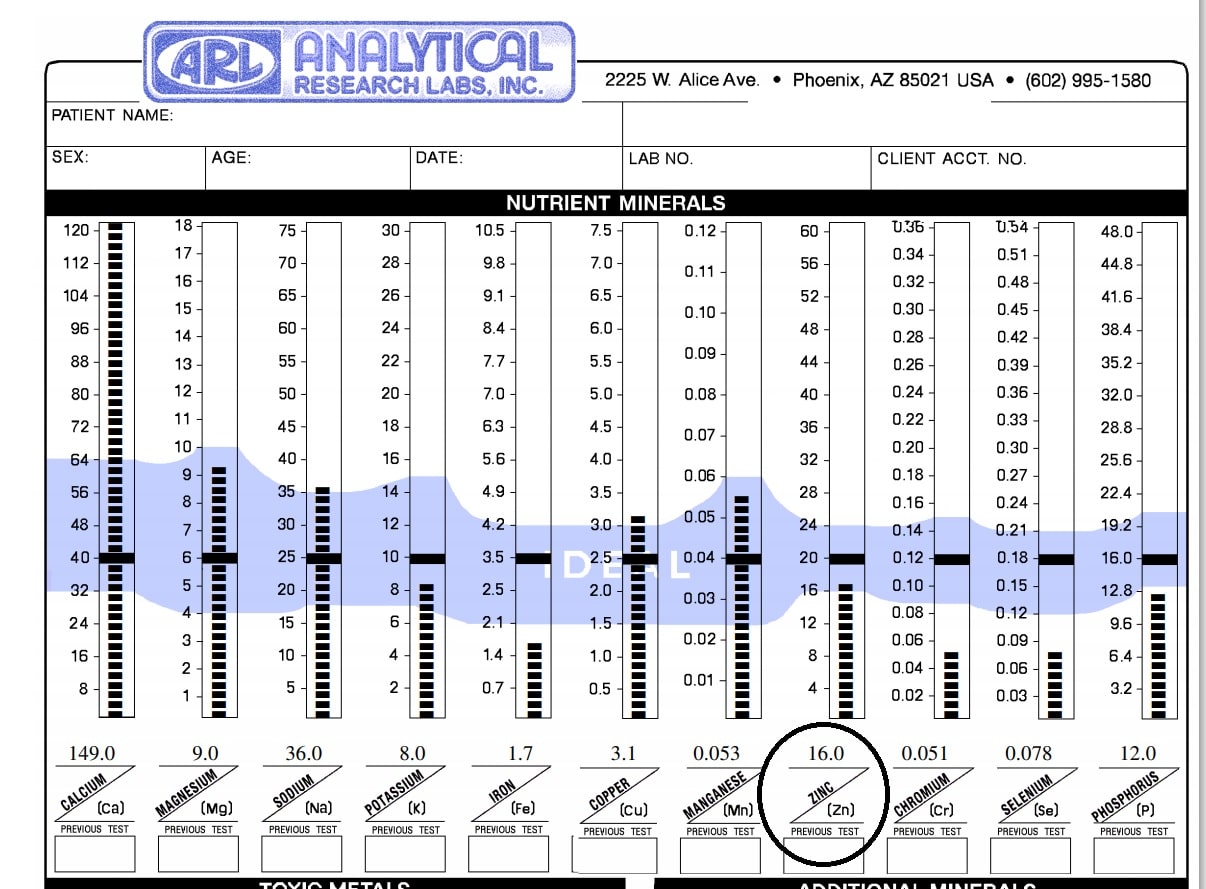 Zinc is a very interesting mineral. It is also one I commonly see low in hair tissue mineral analysis (HTMA).

It plays an important role in facilitating hundreds of biochemical reactions.  Due to its role in enzymatic function, it can impact metabolic pathways such as carbohydrate, protein, nucleic acid, and lipid metabolism.  It is also a structural component in thousands of transcription factors and can affect gene expression that impacts many physiological processes in the body.  “Zinc appears to be part of more enzyme systems than all the rest of the trace minerals combined; over 300 enzymes from every enzyme class (oxidoreductases, hydrolases, lyases, isomerases, transferases, and ligases) require zinc” (Gropper, n.d.). Some of these zinc dependent enzymes include:

Zinc itself also is believed to stabilize membrane structure by stabilizing phospholipids and thiol (SH) groups in enzymes and membrane proteins that need to be maintained in a reduced state.

Additionally, zinc in cells is found bound to tubulin, a protein that makes up the microtubules. Microtubules are thought to act as a framework for structural support of the cell as well as enable movement.

Zinc is also important for taste; it is a component of gustin, a protein involved in taste acuity (Gropper, n.d.).

Zinc deficiency can be associated with decreased mobilization of retinol from the liver (even with adequate liver vitamin A stores) as well as decreased plasma retinol-binding protein concentrations (Gropper, n.d.).

An overall deficiency of zinc stores within the body has been implicated in the systemic susceptibility of infection  and in the pathogenesis of some cancers (Liu et al., 2011)

Zinc also demonstrates an important role within the lumen of the alimentary canal, as evidenced on the observations that supplementation of oral diets with Zn2+ has beneficial effects on diarrhea and inflammatory conditions of the gastrointestinal tract (Liu et al., 2011). “In gastric mucosa, adequate intracellular stores and luminal content of Zn2+ may regulate integrity of  and acid secretion by the gastric glands and enhance protection of the mucosa as a whole against acid-peptic injury (Liu et al., 2011).

Evaluating zinc nutriture is difficult, owing to homeostatic control of body zinc. A variety of indices have been used to assess zinc status, including measurements of zinc in red blood cells, leukocytes, neutrophils, and plasma or serum.

Serum zinc and serum metallothionein concentrations can be used to indicate poor zinc status if both are low. Elevations in serum metallothionein coupled with low serum zinc, however, usually suggest an acute-phase response, and in such conditions these indices are not reliable. Urinary zinc excretion remains fairly constant over a range of intakes and is thought to be a useful marker of status in those with moderate to severe zinc deficiency (Gropper, n.d.)..

Low hair zinc may be associated with chronic intake of dietary zinc in suboptimal amounts; however, the concentration of zinc in hair depends not only on delivery of zinc to the root but also on the rate of hair growth, which is affected by other conditions (including protein status)(Gropper, n.d.).

.Measurement of the activity of zinc-dependent enzymes has also been employed as an index of zinc status. Studies using enzymes as indicators typically have measured carbonic anhydrase or alkaline phosphatase, which “hold” zinc less securely than other zinc metalloenzymes.

Ideally, measurements of activity should be taken before and after zinc supplementation (Gropper, n.d.)..

Supporting deficiency in adults typically requires oral zinc supplementation; doses of 10–20 mg/day are recommended. Although higher doses (often up to 50 mg given two to three times per day) may be prescribed, use of such doses is more likely to impair copper status.

Some population groups—especially older adults, vegetarians, and those with alcoholism and with limited income—have been found to consume less than adequate amounts of zinc.

Additional conditions associated with an increased need for intake include trauma, sickle-cell anemia, and disorders causing malabsorption such as Crohn’s disease, short bowel syndrome, celiac disease, and liver failure, as well as surgical bariatric procedures, especially Roux-en-Y gastric bypass and duodenal switch, used to treat obesity. Diarrhea and intestinal fistulas also substantially increase fecal zinc losses; supplementation with up to 20 mg of zinc/day may be needed under such conditions.

The detrimental effect of excessive zinc intake on copper absorption is thought to be attributable to zinc’s stimulation of the synthesis of metallothionein, which has a higher affinity for copper than for zinc. With increased intestinal concentrations of metallothionein induced by high zinc levels, ingested copper readily binds to the metallothionein within the enterocyte and becomes “trapped,” preventing its passage into the plasma. The increased risk of copper deficiency precipitated by zinc supplementation led to the Tolerable Upper Intake Level for elemental zinc of 40 mg daily.

Recent reports have begun to explore the mechanisms that regulate cellular homeostasis of Zn2+ in mucosal cells of the gastrointestinal tract (Liu et al., 2011)

“In the current set of studies, we find that Ca2+ facilitates optimal uptake of Zn2+ across the cell membrane, implying that it is either a counter-ion in exchange or it is acting as a regulatory second messenger. Membrane proteins that facilitate Zn2+ transport constitute the SLC30A (ZnT) and SLC39A (Zip) gene families” (Liu et al., 2011).

Cadmium, if present in high concentrations in the body, appears to bind to sites to which zinc would normally bind and thus disrupts normal zinc functions. For example, cadmium can replace zinc in zinc fingers, preventing the fingers from functioning as they would with zinc present.

Zinc is found in foods complexed with nucleic acids and with amino acids that are part of peptides and proteins. The zinc content of foods varies widely.

Very good sources of zinc are red meats (especially organ meats) and seafood (especially oysters and mollusks). Other relatively good animal sources of zinc include poultry, pork, and dairy products. Animal products are thought to provide 40–70% of zinc consumed by most people in the United States.

Cereals, some of which may be fortified, are thought to provide about 30% of the zinc in the U.S. diet. Fruits contain little zinc.

Plant sources, however, not only have lower zinc contents, but zinc from plants is also absorbed to a lesser extent than zinc from animal sources (e.g., meat).

Zinc absorption is enhanced with:

Glutathione and products of protein digestion, such as amino acids, serve as ligands (such as sulfur, cysteine, or nitrogen). Interestingly, amino acids serving as ligands help maintain zinc’s solubility in the gastrointestinal tract

Absorption of zinc is also enhanced by an acidic environment. Thus, the use of medication such as antacids, H2 receptor blockers (such as Zantac [ranitidine], Tagamet [cimetidine], or Pepcid [famotidine]), and proton pump blockers (such as Prevacid [lansoprazole] or Prilosec [omeprazole]), which are commonly taken to treat heartburn, gastroesophageal reflux disease, and ulcers, increases gastric and proximal intestinal pH and decreases zinc absorption

Other minerals such as iron and calcium negatively impact absorption